This tutorial explains how I used Corel Painter, Adobe Photoshop and a Wacom Tablet to create a digital illustration for the Shadowfist Trading Card Game featuring a cybernetic monkey fighting against a robot. This tutorial also appeared on the the book Digital Fantasy Painting Workshop 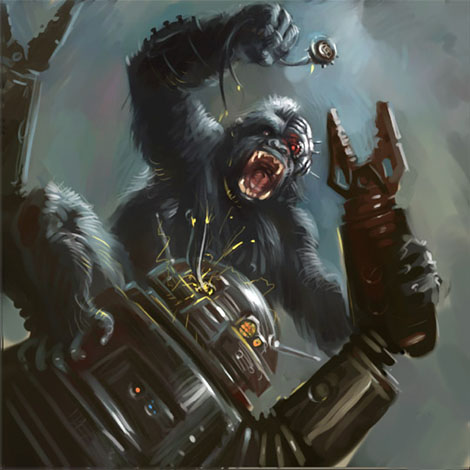 This illustration was done for a trading card game. I was required to paint an action scene, a fight, between a cybernetic monkey and a robot (not a modern looking one, but one closer to the ones from the old sci-fi movies from the ’50s).

This sketch was done using the Brushes tool on Corel Painter 7 and a Wacom Intuos 2 Tablet. Usually, I try to sketch as fast as I can, only concentrating on shapes, light and shadow, pose and action.

One factor to consider during the sketching process is that if you stop too often to THINK, rationalize, analize what you are sketching from your imagination, you may interfere with your right emisphere while it is hard at work, attempting to translate the image in your mind’s eye to your hand and then the paper/screen. Let it be an automatic process. Just let it flow. 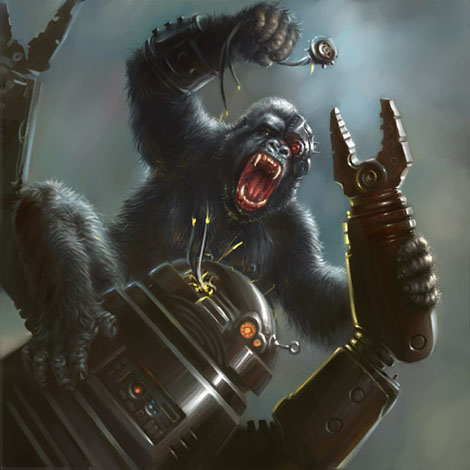 This is the main stage where I paint the foreground elements. Still using the Painter “Brushes” tool and a medium opacity setting, I concentrate on reshaping all the forms to their final position and dimensions. I work on the lighting. At this point, I may use reference pictures for refining the way the light and shadow would play on the various parts of the subjects.

The robot was done completely from imagination, it consists of simple shapes and as such it was not too difficult to imagine how it would react to the light sources. Notice the yellow highlights added at this stage, I was already planning to add the electric sparks later on.

During this part of the process, I used a brush of various sizes, with smaller and more carefully positioned strokes. 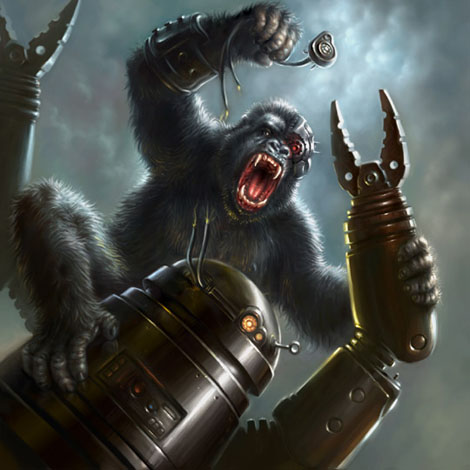 At this point, I imported the image into Photoshop. Using the smudge tool (with very low opacity) I blended the brush strokes on the robot to give it a smoother metallic look.

Then, I used the dodge tool to add higlights to some areas that were still too dark, especially on the monkey’s arms and head and also on the robot’s right arm. I find the dodge tool very useful to get highlights in place quickly.

This technique is especially useful because time is a rare commodity for the commercial illustrator, especially when working on multiple projects. I then moved to add a bit more detail on the moneky’s fur by using the smudge tool with a small brush.

The smudge tool is extremely handy when working on hair, fur and any other flowing curved shapes, especially if you have a pressure sensitive tablet and stylus.

The background was then added using the regular paintbrush tool with a medium opacity and 0% hardness brush.

Now that the painting was finished, I moved on to add various effects.

The first step, was to add the electric sparks. I painted them on a separate layer and then applied an “Outer Glow” effect.

I then moved on to soften the bright areas of the image (this is an effect I usually add to all my artwork). It goes as follows: I flattened the image to a single layer called “art”, I then duplicated the “art” layer and called it “glow”. I then applied a “Gaussian Blur” with a large radius effect to the “glow” layer, obtaining a very blurred image.

Now, I set the “glow” layer blending option to “Lighten” and lowered its opacity to 20%. Now, with the original layer showing through, the image highlights look softer and more natural.

Then I flattened the image again and then adjusted its brightness and luminosity using the “Levels” tool. As a finishing touch, the signature logo was added (it is large because the artwork would be very small on the trading card, and I wanted the logo to be still seen clearly). 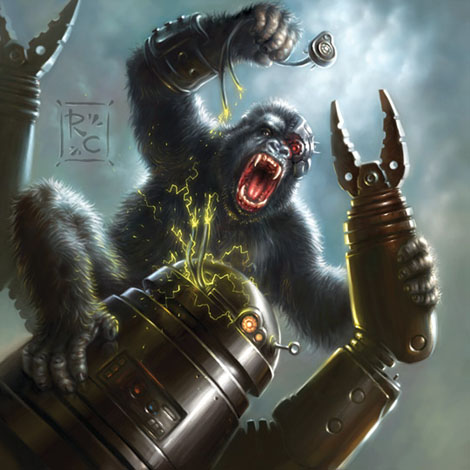 This is an awesome image! I have copied it onto my blog (with attribution) just to show how awesome it is. If you would prefer, I will take it down, but I do so enjoy a good cyborg monkey and would prefer to show it off to other monkey-appreciating people! Great job!

before i’ve seen this, i couldn’t imageine, that its possible, to create pics lice this with just this 3 tools.

I want a Photoshop tutorial about digital painting

[…] confirmed that the image it appears to have been taken from a tutorial featuring the illustration posted on his blog in 2007. While he was surprised to see it showing up […]

[…] substantially one of a in between stairs of a tutorial. Tutorials were arrange of my explain to celebrity a several years ago — we was one of a […]