This tutorial gives a detailed explanation on how to create a digital illustration using Photoshop and only a mouse as the input device. Of course, the tutorial also applies to users who own a graphic tablet (I recommend Wacom). The tutorial was featured in the book by Ilex Press. 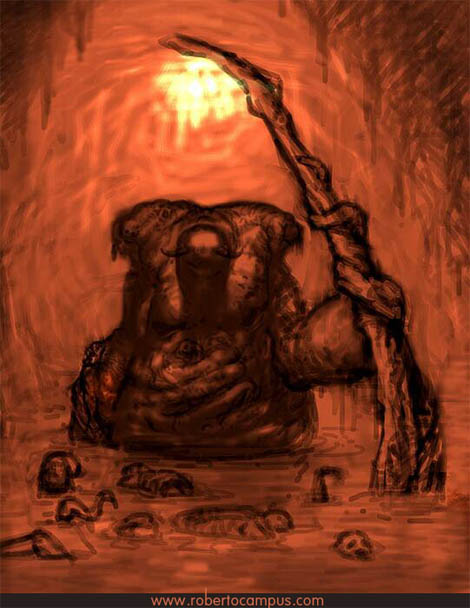 This tutorial explains a method and technique especially useful when the only input tool available is a mouse and a keyboard, no graphic tablet.

This drawing was inspired by a vivid vision from a nightmare.

The first and most important step for me is to set the right mood for the illustration. I chose to use an orange background color because flesh tones can be easily rendered from it.

I then sketched the main subject on a separate layer (set on multiply) that I kept above the plain colored background.

At this stage, I used the Paintbrush tool set on normal mode with a 10% – 50% opacity black smooth brush varying in size from 5 to 80 pixels wide.

To avoid slowing down the computer during the sketching process I prefer working in low resolution (72 DPI). This way I can draw enjoying a more natural flow without having to worry about Photoshop catching up on my last stroke.

Also, I did not spend any time on details during this phase: I fully concentrated on roughing out the shapes, volume and composition.

Step 2 – Turning on the light 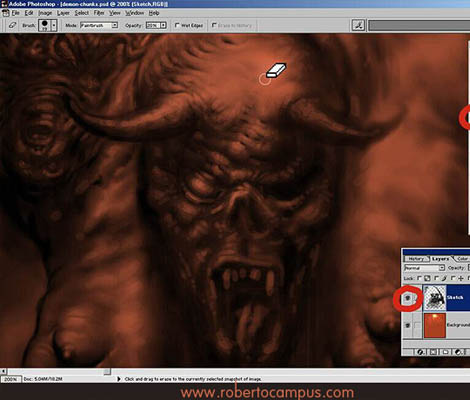 Sketch finished, I resized the image to a higher resolution (300 DPI). The focus shifted to refining the lighting in the sketch layer.

For this stage I employed an opacity “subtraction” technique. I relied heavily on the eraser tool (10%-30% opacity medium sized hard-edged brush) to lighten up areas that were too dark.

While sketching, I had decided that the main light source would be positioned very high above the subject, almost perpendicular to it.

The perfect place for a light source when you need it to cast strong and dramatic shadows.

I zoomed in to 200% and started working on the demon’s head. Where I felt a highlight was needed I erased pixels to reveal the orange background below.

I imagined the demon skin as being very rough and wrinkly, with many heavy folds layered on each other.

I begun defining its base texture by adding smaller highlights (with a 5 pixel wide hard-edged brush) where I felt skin creases and folds should go.

Once finished with the highlights, I was left with a very light amount of pixels on the figure layer. I planned this, because the next phase in the drawing was mostly based on smudging. 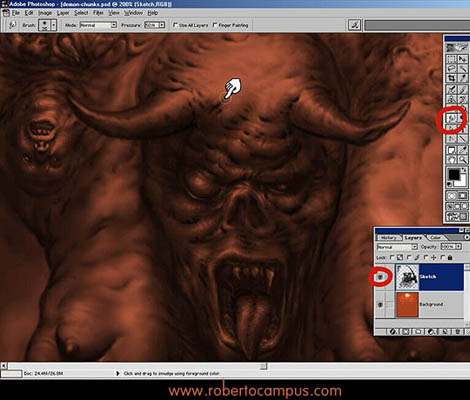 Here is where all the rough edges disappear and the highlights blend in.

The smudge tool is the slowest Photoshop painting tool and I find its performance not to be fast enough, not even on a powerful PC. This is why I made sure to arrive to this step with the least amount of pixels to smudge.

Also, while working on this step I paid careful attention to every brush stroke so to avoid having to go back and fix areas of the drawing later on in the process.

Mostly, I used the smudge tool set to normal mode, 40% opacity and a brush size from 10 to 30 pixels wide. The goal was to blend all the highlights I had put in place before, making sure at the same time to shape all the skin folds and creases in a very organic (and twisted!) way.

After having blended the highlights in, I had to use the paintbrush tool to darken many areas. I applied short strokes of black pixels where needed and then I smudged them and shaped them to add detail to shadows that were lacking in strength. This is a technique I use when I paint in real media (oil colors on board) and I love to apply it to the digital medium.

This step was definitely the slowest part of the whole process (probably 35 hours of work, 2-3 hours a day for a few weeks). 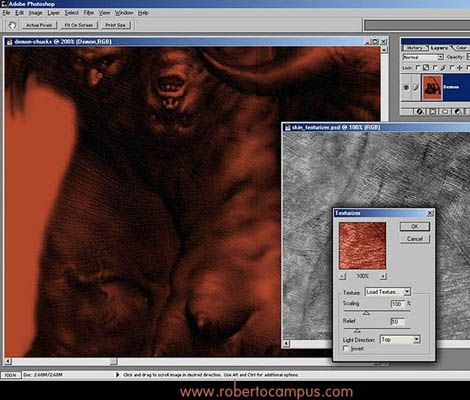 Once I finished adding details and finer shadows, I decided that in order to add more realism to the main figure, I had to apply textures to it.

I started by flattening the main figure and the background layers into a single one. To create the texture, I scanned the skin on the palm of my hand at 600 DPI and saved it in Photoshop format (PSD).

I opened the new file in Photoshop and I created a seamless pattern (using the clone stamp tool to blend areas closer to the edges). I tested out the pattern to see if it would tile without a seam and when I was happy with the results I saved it as a PSD file.

Next, I went back on editing the demon illustration. I used the mask tool to create a selection that would encompass the main figure and then I saved the selection as an alpha channel (for later use).

To apply the newly created texture I used the Texturizing filter. I set its size at 150% with relief set on 10. After the filter was applied, I used the recent Photoshop feature that allows to “fade” out the last effect that was applied. I set the fade out value at 60% to reduce the strength of the texture on the main figure.

Now the skin had achieved a realistic gritty look that reminded me of elephant skin. The image was ready for the next step. 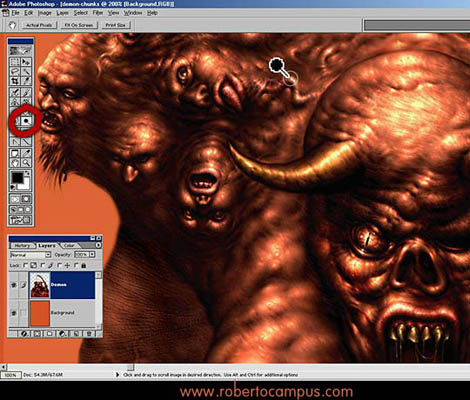 The dodge tool is my favorite tool when it comes to creating highlights on flesh. It is very helpful when used correctly.

I set the dodge tool to highlights and starting from a red-orange base, I easily brought up lighter oranges and yellow tones. I proceeded to apply the effect on all the areas that required highlights using a small brush and an exposure mostly set on 25%.

For lighting up larger areas I used the paintbrush tool set on “overlay” with a light color (yellow and white) and opacity of 10%. The overlay blending mode works really well when you need to add light to an area while at the same time avoiding drastically changing its hue (color), like the dodge tool often does.

During this step, once again, I add to darken many areas and also I colorized a few details of the subject such as the horns and teeth to give them a more yellow appearance.

I had fun adding many smaller additional details: a vast number of veins and skin folds, teeth, saliva and eyes on the heads embedded on the demon’s shoulder. 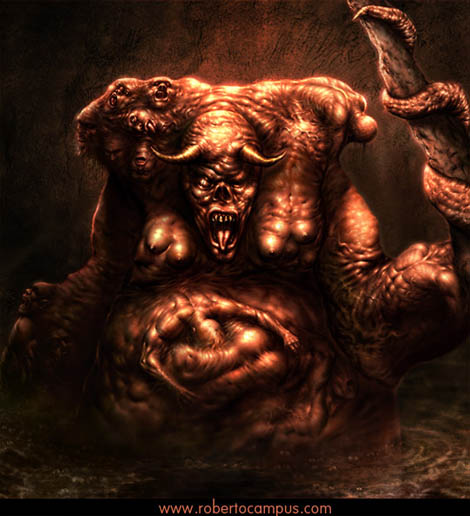 The main subject was ready. All I needed now was a background and some minor foreground elements, such as the pool of liquid the demon is partially immersed in and the long stick/scepter in its tentacle’s grasp.

For the background I used 3D Studio Max to render a cave wall. The process would require a tutorial all on itself, but for simplicity I will explain the major step involved in it: I used a few rock textures I had created before. I blended them together into a seamless pattern and saved the image. I then imported it in 3D Studio and I assigned the pattern as a bump and diffuse material to an object that was illuminated by a single red light source.

The scepter in the demon’s tentacle was created in 3 steps. First I put the scepter on a separate layer (below the demon’s layer). Then a texture was applied to it using the texturizer. Finally I used the dodge tool to bring highlights up. I also drew a chain and a hanging skull on top of the scepter (this alone, took me 8 hours).

What I was aiming for now was to join all the elements into a harmonious whole. I adjusted the image levels and colorized it until I obtained a more uniform feel and tone.